In this article we are not going into the military details of Napoleon’s 1812 campaign against Russia – you can read them here. Rather, this article aims to explain the political and economic reasons for the greatest military conflict of the 19th century.

Entry of Napoleon I into Berlin, October 27, 1806, by Charles Meynier

The main reason why the war between Napoleon’s France and Russia began in 1812 was because of sanctions – Napoleon’s so-called “continental system”. But what was it?

In the years 1792-1793, the Republic of France was embroiled in the French Revolutionary Wars – France fought against Great Britain, Austria, Prussia, Russia and several other monarchies. The “old” monarchies of Europe abhorred the republican system of government installed in France. Meanwhile, Napoleon Bonaparte appeared in France, a young war commander of genius who had become the de facto leader of France in 1799.

At the beginning of the 19th century, France had conquered areas on the Italian peninsula, the Netherlands and the Rhineland. Great Britain remained France’s only opponent in Europe. After the Battle of Trafalgar in 1805, it became clear that the French Navy was useless against the British fleet, and so Napoleon began to strengthen the continental system – a large-scale embargo on British trade on the European continent.

CONTINUE READING: How was Napoleon respected in Russia?

Napoleon wanted to destroy Britain’s tradability in order to drain her financially. The Berlin decree of 1806 proclaimed that “the British Isles are in a state of blockade” and forbade all correspondence and trade with Great Britain. However, European countries kept breaking the blockade, which led to attacks by Napoleonic France on them. The Russian Empire, at that time Britain’s most important European economic partner, was also France’s main enemy and main obstacle to the successful implementation of the continental system.

Russia and the continental system 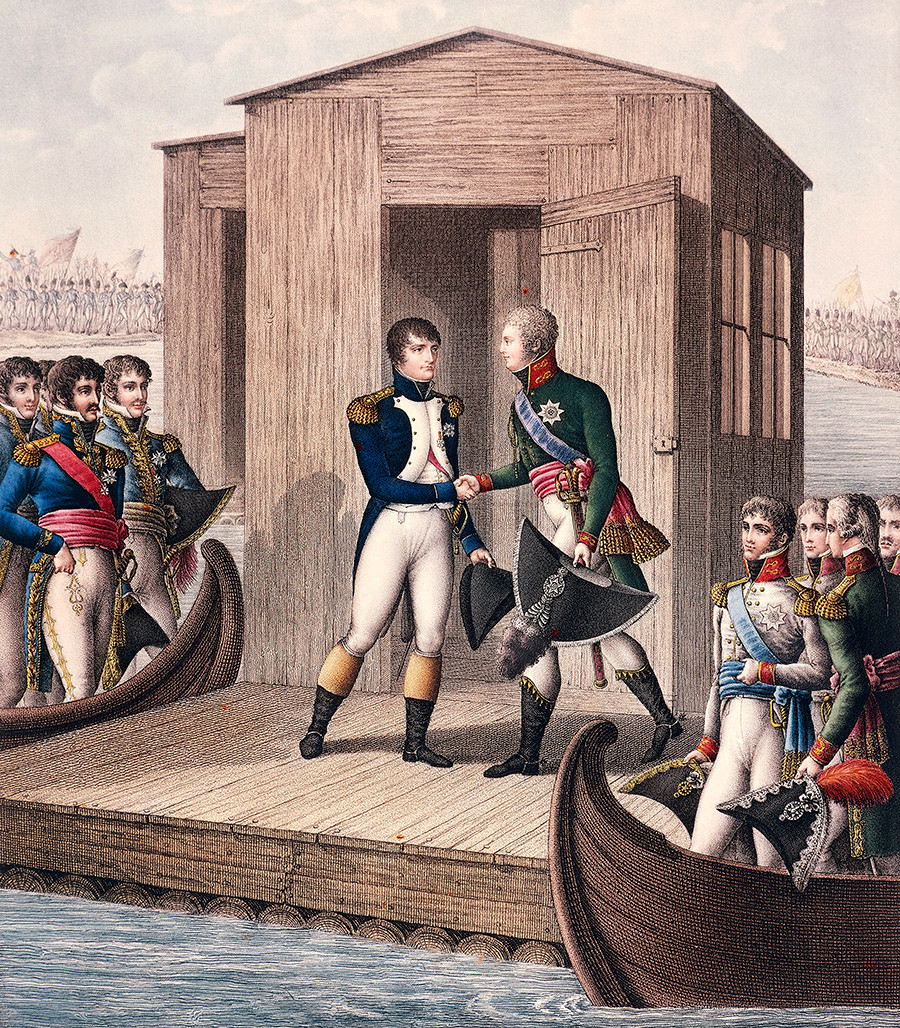 Meeting between Napoleon Bonaparte and Tsar Alexander I Romanov in Tilsit, June 25, 1807.

In the Battle of Friedland (1807) Napoleon defeated, if not destroyed, the Russian army. After that, Alexander I of Russia agreed to sign the Treaty of Tilsit, which allied Russia and Prussia with France against Great Britain and Sweden.

The Tilsit Treaty angered the Russian public – made peace with a republican whose army killed thousands of Russian soldiers! However, in 1810 Russia resumed trade with England via other countries while French goods were heavily taxed. Meanwhile, Napoleon tried to strengthen his ties with Alexander I by shaking hands with Alexander’s sisters, but was refused twice.

In 1811 Napoleon spoke openly about his hostile attitude towards Russia. He said to Dominique Dufour de Pradt, the French ambassador in Warsaw: “In five years I will be the master of the world, Russia will be alone; but I will crush them … I will then also be the Lord of the Seas and of course all trade must pass through my hands. ”It had been obvious that the war was at hand.

What was this war for Russia? 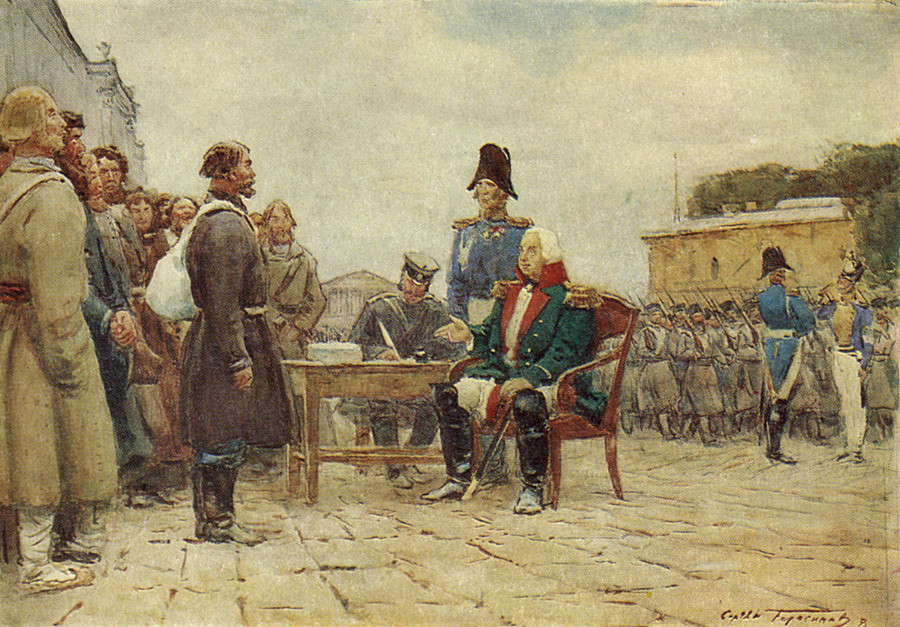 “Mikhail Kutuzov as head of the St. Petersburg militia” by S. Gerasimov

Ministry of Defense of the Russian Federation

Without skipping the myriad details of the Russian and French warfare at the time, let’s stick with the core events of the war. On about June 24, 1812, when the Great Army crossed the Russian Empire by crossing the Neman, Napoleon had about 588,000 soldiers against 480,000 Russians, but the Russians fought at home and with the help of Russian partisans who terrified the French everywhere on their ” Stay “in Russia.

Researcher Mikhail Belizhev notes, “The scale of the war itself was unique. For the first time since the 17th century, war was waged on the territory of the Russian Empire, which came as a real shock to contemporaries. Moscow, the heart of the empire, was given to the French and largely destroyed – at the time it was interpreted as a national catastrophe. The country suffered enormous losses: in 1812-1814 up to a million inhabitants of Russia were killed; The property damage was estimated at several billion rubles. “ 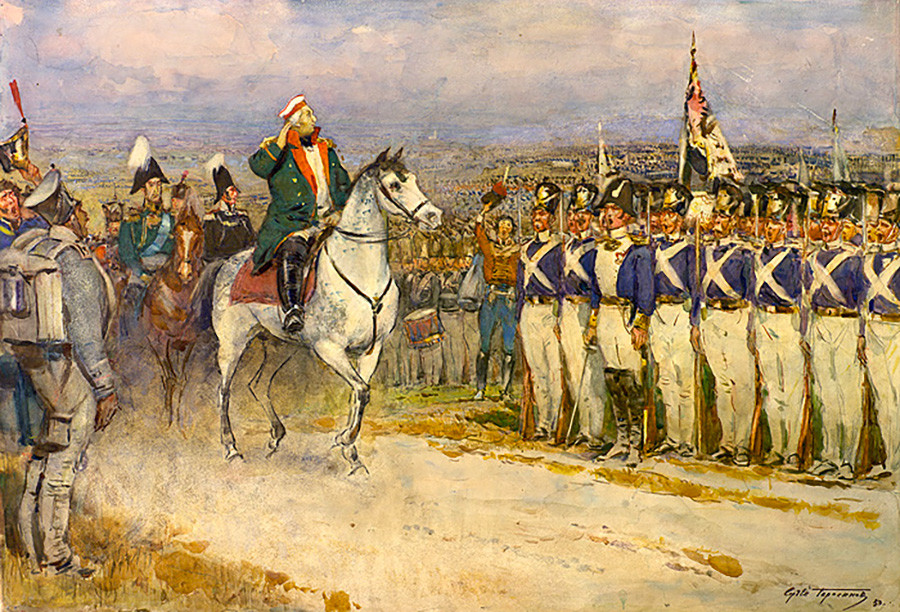 “The arrival of Mikhail Kutusov in Tsarevo-Saimishche” (“Kutuzov takes command of the Russian Imperial Army”), by Sergey Gerasimov

The Great Army invaded Russia decisively and, under constant resistance from the Russian army, advanced towards Smolensk, the fortress that was considered the “key to Moscow” and which it captured in August 1812. The attack was not easy, however, as both the Russian army and civilians followed a scorched earth policy: while retreating, Russian soldiers destroyed food supplies, ammunition supplies and all assets that could be used by the enemy. Who has implemented this policy?

The Scot behind the Russian victory 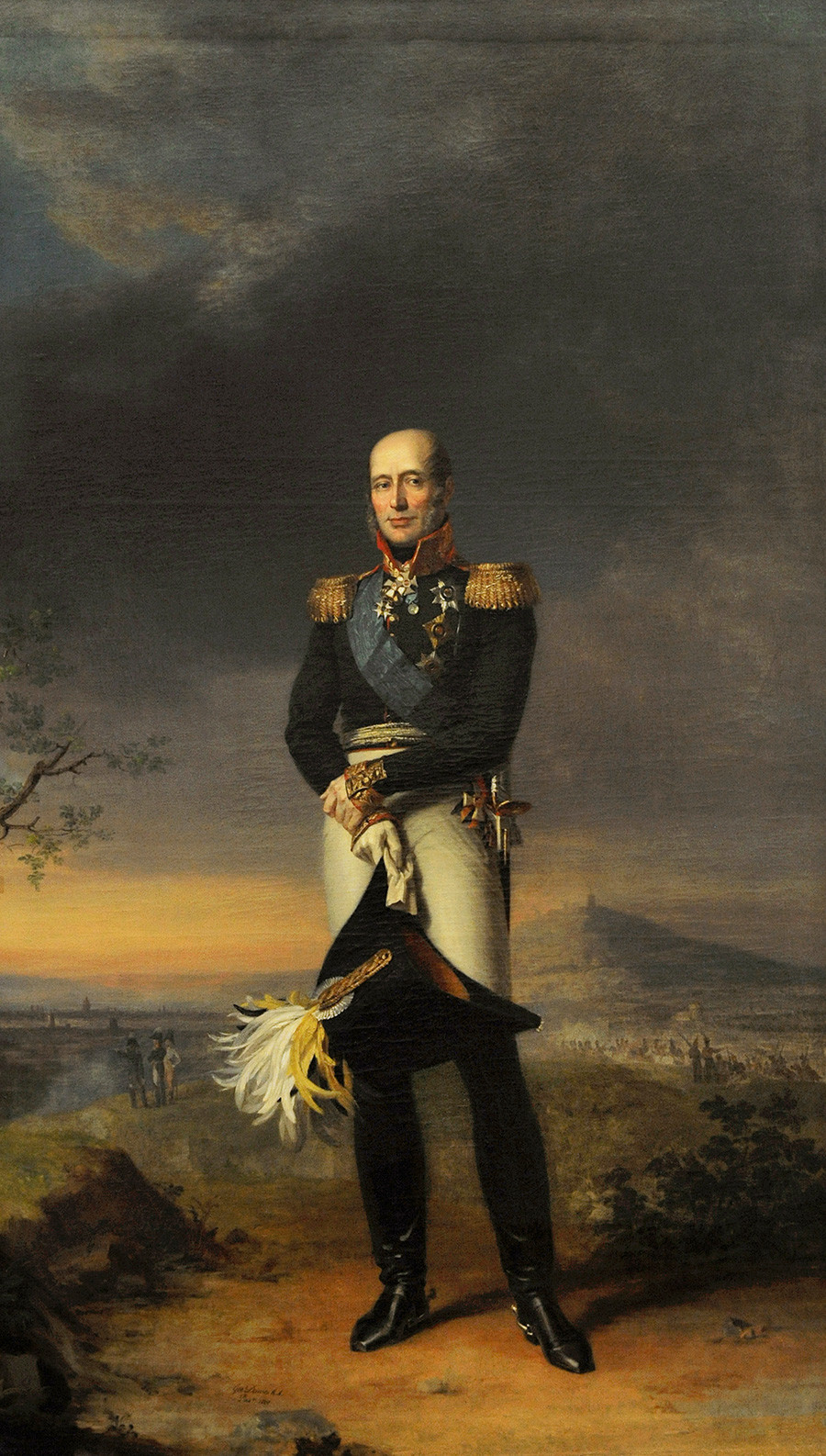 Michael Andreas Barclay de Tolly (1761-1818) was a Baltic-German officer of Scottish origin in Russian service. As a descendant of the Scottish Barclay clan, he grew up in St. Petersburg and entered the military in 1776. He later became Field Marshal of the Russian Empire.

Barclay was Minister of War from 1810 to 1812. He effectively prepared the Russian army for the decisive battle with Napoleon by ordering and personally creating many tactical and strategic tutorials and manuals for the soldiers and officers. When the war began, Barclay and General Pyotr Bagration both acted as commanders in chief of the Russian army. 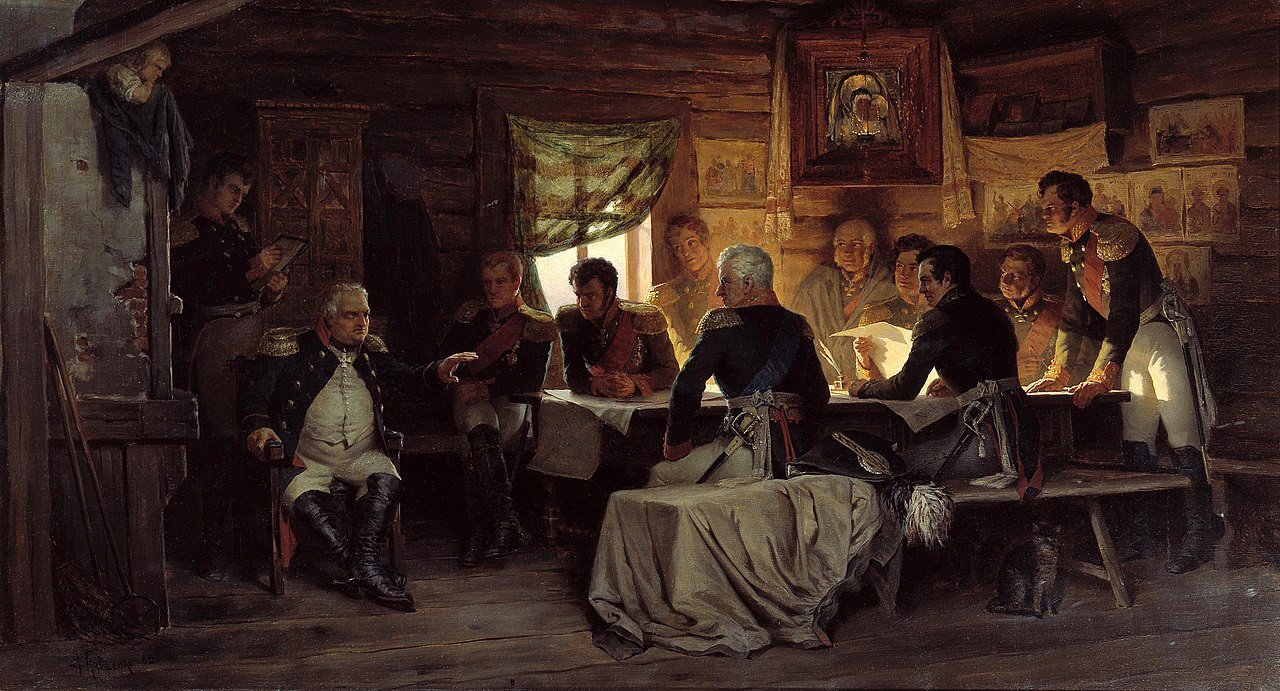 “The Military Council in Fili” (1880) by Sergey Kivshenko

However, it was Barclay who first worked out the master plan for the Russian army during this war: With a scorched earth policy to retreat back to central Russia in order to exhaust the resources of the French army. The French supply routes, Barclay rightly guessed, would become too long to supply the army from Europe and the Russian partisans, and the army would do the rest to destroy the enemy.

At the Fili Council, held shortly after the Battle of Borodino, Barclay firmly voted to hand Moscow over to Napoleon, a wise strategic move that eventually captured the French Emperor in cold, brazen, and burning Moscow with no supplies. Entrusting command of the army to Mikhail Kutuzov, Barclay nonetheless remained in command of one of the armies and later fought in Russia’s European campaign from 1812-1814. 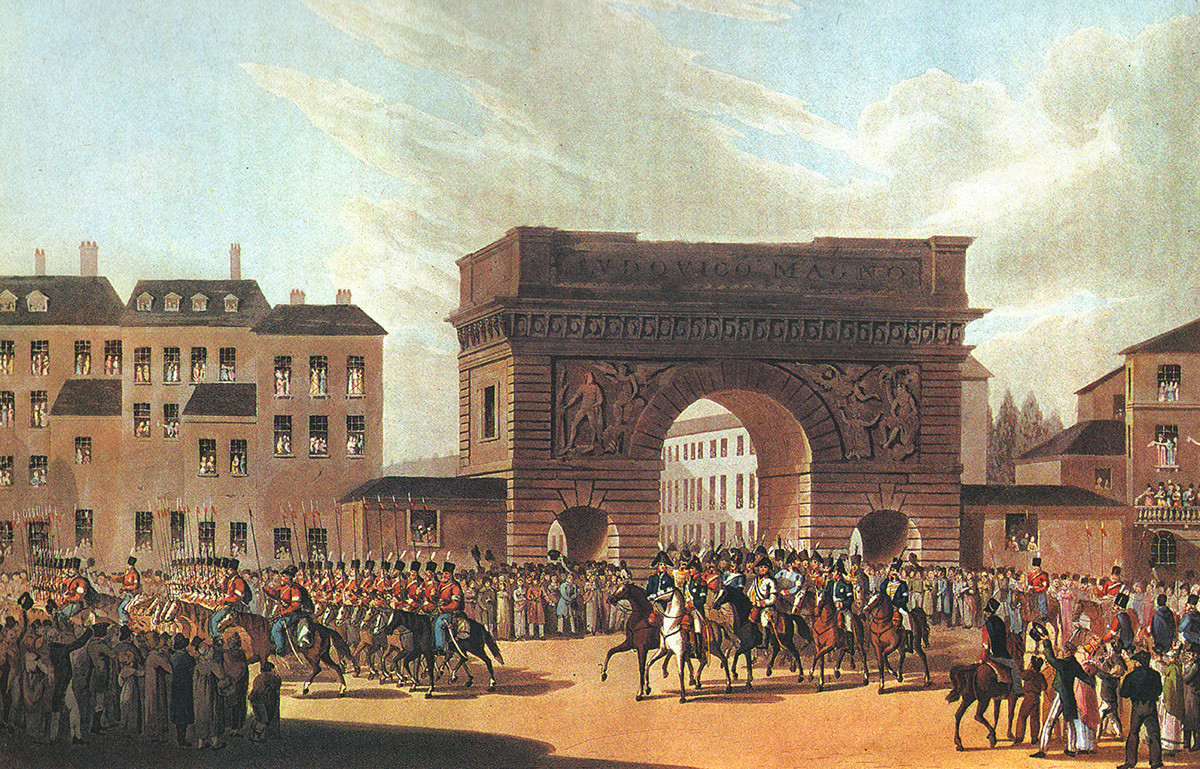 Russian historians of the 1812 campaign agree that Barclay’s original strategy was not changed by Mikhail Kutusov when he took command of the army. After defeating Napoleon, Barclay was showered with awards and recognitions. He was elevated to princely dignity by Emperor Alexander I and is widely regarded as the leading figure in the Russian victory over Napoleon.

Meanwhile, Napoleon’s continental system, which served as the main reason for Napoleon’s attack on Russia, was terminated by Russia as early as September 1812 when Alexander I published a manifesto resuming trade relations between Russia and Great Britain.

Whenever you use all or part of Russia Beyond content, always provide an active hyperlink to the original material.